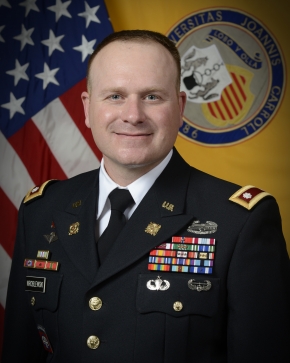 Lieutenant Colonel Mike Wroblewski is a native of Wattsburg, Pennsylvania. He enlisted in the Pennsylvania Army National Guard as an 11B Infantryman in 1997.  After graduating in 2000 from Edinboro University of Pennsylvania with a Bachelor of Arts degree in criminal justice, he received his active duty commission in the Army Ordnance Corps as a Second Lieutenant through ROTC.

From 2004-08, he was assigned to the 82nd Airborne Division, Fort Bragg, NC.  He served as the 82nd Forward Support Battalion Operations Officer where he deployed to New Orleans, LA in support of Hurricane Katrina relief effort.  In 2006-08, he commanded Bravo Company, 82nd Brigade Support Battalion, 3rd Brigade Combat Team, 15 months of which was deployed to Operation Iraqi Freedom.

From 2012-15, he was assigned to the United States Transportation Command, where he served as a Joint Strategic Planner, Executive Officer for the J5/J4, and 20 months as Aide-de-Camp to the USTRANSCOM Deputy Commander (Navy Vice Admiral).  Following his assignment at USTC, he served as the lead planner for Operation Atlantic Resolve while assigned to the G4, U.S. Army Europe HQ in Wiesbaden, Germany from 2015-17.

In 2020, he served as the 7th Infantry Division Assistant Chief of Staff, G4 Sustainment Chief, Joint Base Lewis-McChord, WA.

In addition to other military professional and civilian education, he also completed Air Assault

Lieutenant Colonel Wroblewski is married to the former Michelle Kieklak of Wattsburg, PA.  They have three children: Abigail (16), Gavin (14) and Annalise (10). 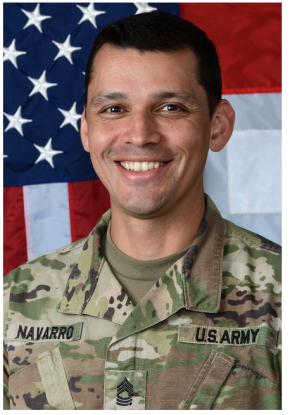 Master Sergeant (MSG) Diogenes Navarro joined the Army as an Airborne Infantryman in 2000 and is currently the Senior Military Science Instructor for John Carroll University ROTC. His previous assignments have taken him around the world from Ft. Bragg, NC to Italy and Germany. MSG Navarro’s deployments span from 2001 to 2018 which include peace enforcement operations throughout Kosovo and Macedonia, combat deployments to Iraq and Afghanistan, and a multinational deployment to Poland.

While stationed in Europe, MSG Navarro also took part in numerous partnership training events throughout Romania, France, Hungary, and Austria. He has had the unique experience to have parachuted out of military aircrafts for 15 consecutive years as a profession. MSG Navarro’s goal is to utilize his diverse leadership experience to strengthen and develop the ROTC Cadets into adaptable, cohesive and discipline driven Army Leaders.

Major Allen is married to Hilary Allen and they have three children Jack (3), Julia (2), Joanna (newborn). The Allen’s reside in Canton, Ohio 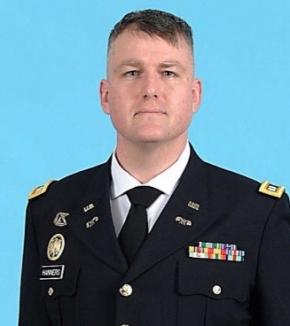 AP Nathan Hanners was commissioned in the Army Reserves after graduating from Officer Candidate School on 24 March 2011. His first unit was the 370th CBRN CO where he served first in Norman OK as platoon leader, detachment commander, and finally as company executive officer.  He mobilized with the Army Central Command augmentation detachment in 2015 serving in Kuwait, Bahrain and Jordan spending a total of 23 months OCONUS.  He was assigned to Frist Army in 2017 as G6 plans and operations chief. He was selected for AGR in 2018 and served at the 479 CBRN battalion as the assistant S-3.  He took Command of the 320th Chemical Company in September 2019.

He graduated from the University of Texas in Dallas, 2009.   As a civilian he has worked as maintenance supervisor and manager in Dallas TX.  This work involved planning maintenance operations in the Dallas area for over 1000 heavy duty trucks and leading a team of skilled technicians and administrators.

He’s married Ligaya Hanners of Quezon City, Philippines. They have been married for 10 years and live in Cleveland Heights with their 2 dogs.  They are both Texans at heart!

Ms. Theresa M. Bodnar is incredibly excited to return to John Carroll University (JCU) to serve as the Recruiting and Operations Officer for the Wolfpack Battalion.  She is a JCU ROTC Alumna (’01) and also a Colonel in the US Army Reserve.  Theresa is a native of Ashtabula, Ohio, and was commissioned in the Quartermaster Corps in 2001, after graduating from JCU with a Bachelor of Arts degree in Elementary Education.  She also holds a Masters in Organizational Leadership from Robert Morris University, and a Masters of Business Administration and Executive Masters in Policy Administration from Syracuse University.  Theresa completed 20 years of Active Federal Service on 30 Sep 2021 and is now an Individual Mobilization Augmentee (part-time Reservist) with the Center for Strategic Analysis, US Army War College.